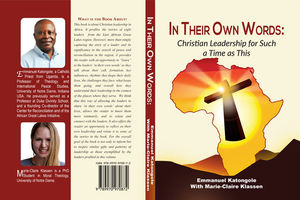 The newly published book, In Their Own Words: Christian Leadership for Such a Time as This, presents the stories of eight Christian peacebuilders and leaders from the East Africa Great Lakes region. The stories were shared during interviews with co-authors Emmanuel Katongole, professor of theology and peace studies at the University of Notre Dame’s Kroc Institute for International Peace Studies, and Marie-Claire Klassen, a Ph.D. candidate in theology and graduate minor in peace studies. The leaders reflect, “in their own words,” on their call to leadership, formative influences in their lives, daily life rhythms, and their understanding of leadership in the local contexts they serve.

The impetus for the book grew out of a 2017 Great Lakes Leadership Institute where attendees approached Katongole to express a need for a book or resource that would help to share stories of Christian leaders in peace and reconciliation in the region. The Issachar Fund, based in Grand Rapids, Michigan, agreed to provide some funding for the project, and the seed for the book was planted.

Katongole hopes that the book will expand the global understanding of what Christian leadership looks like throughout East Africa.

“I hope readers see stories they didn’t know existed in the East African region,” said Katongole. “I want to increase the awareness that whatever region you are looking at is not hopeless. And I hope peace activists in the region and other readers of the book come out inspired by these stories, and reminded that what we each do in our own context matters.”

Katongole and Klassen used the story of Esther, found in the Hebrew Bible, as a framework for gathering stories. In the Introduction, Katongole they name seven characteristics of good leadership found in Esther’s story and woven throughout the stories gathered in the book as well. In 2018, Katongole invited the eight leaders profiled in the book to join him for a gathering at Bethany House in Entebbe, Uganda, for two days reading the story of Esther and reflecting on leadership together, which laid the groundwork for the stories shared in the book.

Klassen conducted interviews and wrote the chapter featuring Maggy Barakitse, a leader who founded Maison Shalom, a home for orphans in Burundi that welcomes Hutus, Tutsi, Twas, Congolese and Rwandan children. Klassen was struck by Barakitse’s willingness to innovate and get creative even when resources are limited, her exuberance and joy, and her commitment to a regular prayer life that she says sustains her leadership.

“When we think about religious peacebuilding, it’s really important that we are first attentive to the stories of religious peacebuilders already acting in any given region,” said Klassen. “One of the powerful things about this book is it focuses on leaders we have probably never heard from directly in Western peace studies contexts, because they are often people who do not have a big name in Western academic circles. It’s illuminating to tend to the stories of local peacebuilders who transform communities in all these ways on the local level.”

Katongole also hopes that the book will serve as a reminder among peace studies scholars and practitioners that narrative and storytelling are important peacebuilding tools, and to take faith-based leadership practices seriously in peacebuilding work.

“These leaders are christian and issues like prayer and fasting are the kind of things we never pay much attention to, and yet you cannot understand the agency of these peacebuilders without these practices,” said Katongole. “We are inviting peace scholars to be attentive to the theological practices that shape the lives and agency of Christian peace activists.”

In Their Own Words is published in both French and English by Angel Agencies in Uganda. Copies of the book are available on campus at the Kroc Institute and Keough School of Global Affairs offices.