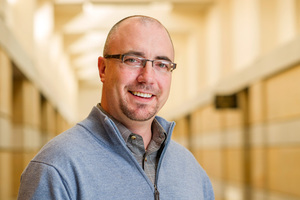 In his new book A Generous Orthodoxy: Prospects for Hans Frei's Postliberal Theology, just released by Oxford University Press, Jason A. Springs reevaluates the work of American theologian Hans Frei, a founder of postliberal theology who taught at Yale University.

Postliberal theology was a response by American religious thinkers who felt that Christian theology had been compromised by the ecumenism and secularism of the late 1960s, according to Springs, assistant professor of religion, ethics, and peace studies at the University of Notre Dame’s Kroc Institute for International Peace Studies.

Frei coined the term “generous orthodoxy” to describe a theological approach that is both faithful to its own religious commitment — “orthodox” — and engaged in open-ended conversation — “generous” — with other academic disciplines and religious traditions, Springs said.

In so doing, Frei struck at the heart of the accepted wisdom of both liberal and conservative theology and was criticized for being inconsistent and unsystematic in his thinking. But “Frei felt that too many systems got in the way of the serendipity of the living God,” Springs said. By balancing theological distinctiveness and interdisciplinarity, “Frei modeled a way for academic theologians to take seriously both their vocation to the church and their roles as interlocutors in academic discourse.”

“Jason Springs has done something quite different and original,” writes Jeffrey Stout, author of Blessed Are the Organized: Grassroots Democracy in America. “He has recast Frei’s central claims in way that frees them from paradox. This book will require theologians to rethink the options they have been debating for the last thirty years.”

“Jason Springs's Toward a Generous Orthodoxy is quite simply the best available account of Hans Frei’s work," writes Stanley Hauerwas, Gilbert T. Rowe Professor of Theological Ethics at Duke University. "But this book is more than just an account of Frei; it makes a constructive contribution to theology that is truly remarkable. This is really a terrific book.”

Jason A. Springs earned his Ph.D. in Religion and Society from Harvard University. In his research and teaching, he integrates religious ethics with moral philosophy and political and social theories. He is particularly interested in religious toleration and the challenges posed by religious pluralism for transforming conflict and peacebuilding. Springs has published articles in the Journal of Religious Ethics, Modern Theology, Contemporary Pragmatism, and the Journal of the American Academy of Religion.