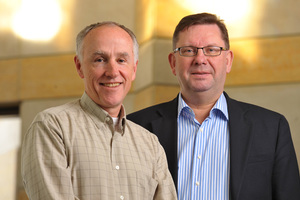 The world faces an unprecedented opportunity to make real progress in reducing the threat of nuclear weapons, according to the authors of Towards Nuclear Zero, a new book in the Adelphi series published by the International Institute for Strategic Studies.

“Nuclear disarmament has moved beyond idealism to a thoroughly realistic vision,” said David Cortright, director of policy studies at Notre Dame’s Kroc Institute for International Peace Studies. “Governments and leaders around the world now recognize that there are sound security reasons why we should reduce our reliance or eliminate nuclear weapons.”

Co-authored with Raimo Väyrynen, former director of the Finnish Institute of International Affairs, Towards Nuclear Zero lays out the opportunities and challenges associated with creating a world without nuclear weapons. The book is “a valuable contribution that shows how nations can be more secure in a world without nuclear weapons and charts the specific policies that can lead in that direction,” said William Perry, former U.S. Secretary of Defense. Margaret Beckett, former British Foreign Secretary, called the book “an important volume which makes the case that ending our reliance on nuclear weapons is a policy for the realist, not just for the visionary, and outlines some practical steps that could help achieve that goal.”

The timing of the publication of Towards Nuclear Zero coincides with the five-year review of the nuclear Non-Proliferation Treaty, a cornerstone of the global effort to control nuclear weapons, which is taking place this month at the United Nations in New York. On May 11, Cortright and Väyrynen will present the book to leading peace and security policymakers at a forum on nuclear weapons sponsored by the International Peace Institute and the Permanent Mission of Finland to the United Nations.