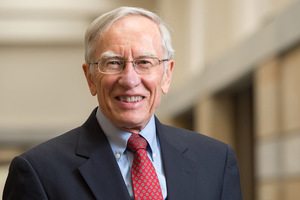 Over five decades of teaching and research in the field of peace studies, Robert C. Johansen became convinced that United States security policy needed to shift away from maximizing U.S. military power and toward emphasizing human security for all nations. This change, Johansen believes, would allow policymakers and citizens to increase national security for the U.S. and sustainable peace around the world.

“The findings of peace research could enable us to prevent war and to have greater economic justice, less poverty, genuine environmental protection, and more respect for human rights if political leaders would simply implement what we know about peacebuilding,” says Johansen, professor emeritus of political science and peace studies at the University of Notre Dame’s Kroc Institute for International Peace Studies. “Substantial evidence enables us to know what needs to be done in order to make peace in the long run, but we don’t do it because we’re primarily focused on maintaining high levels of military preparedness and relying on national military power for security.”

This conclusion led Johansen to develop the concept of “empirical realism,” a theory he posits as an alternative to the dominant international relations theory of “political realism.” Political realism emphasizes maximizing U.S. military power and competing militarily for national security. In contrast, empirical realism emphasizes working to achieve common security, building effective multilateral institutions, and being guided by context-specific “facts on the ground” to meet the needs of all human beings.

Johansen spells out this alternative approach in his latest book Where the Evidence Leads: A Realistic Strategy for Peace and Human Security.

In synthesizing theories of peace research, security studies, and international relations, and encouraging readers to follow “where the evidence leads,” Johansen adds complexity to oversimplified political realist frameworks. He draws on all the social sciences, including evolutionary history and legal studies, to show that while national and ethnic groups can be ruthless toward each other, there are also examples of groups learning to cooperate with one another to increase security benefits for the common good.

Johansen’s analysis aims to revolutionize thinking about national security policy by bringing it into a human security framework. He notes that the several hundred thousand independent political communities existing in 1000 BCE have consolidated into approximately 200 nation-states today. According to Johansen, although appearing independent, most of these groups are interdependent and impact one another’s security and well-being, but lack sufficient global governing institutions to participate equitably in decisions that affect their lives. Within this context, Johansen argues that U.S. policies over the past 40 years have been insensitive to human dignity and have unintentionally laid the groundwork for growing polarization and authoritarianism around the world.

The book explores the failures of U.S. application of political realism in Vietnam, Afghanistan, Iraq, Iran, Syria, North Korea, and elsewhere, and suggests that a move toward empirical realism would not only be more just, but also more likely to produce security benefits.

For Johansen, improved prospects for security are likely to arise from implementing six “causes” or correlates of peace drawn from peace and security research. These include (1) addressing all nations’ security fears; (2) equally emphasizing human security and national security; (3) establishing positive reciprocity in all international relationships and institutions; (4) implementing equity in economic, political, and environmental decisions; (5) expanding the rule of law in international relations; and (6) building democratic global governance to enable formation and enforcement of laws essential for human security.

Johansen provides examples of global architecture that can increase security, such as an international satellite monitoring agency; an individually-recruited United Nations force to prevent Rwanda-like genocides and small-scale violent conflicts; an environmental security council with legally binding authority; and economic reforms to end global poverty, among other ideas. Because the world’s great powers often drag their feet in moving toward equitable economic power-sharing institutions, Johansen describes the need to generate effective transnational nonviolent social movements to press for worldwide political and economic reforms.

Without initiatives like these, Johansen fears that continued pursuit of traditional national security goals is likely to bring catastrophe through environmental destruction, the proliferation of nuclear and other weapons of mass destruction, denial of human rights, and increasingly contentious human migration.

“Alternatively, the consequences of serving human security with help from more effective global governance could open doors onto a future of sustainable peace, security, and increased respect for human dignity—a goal worth living and dying for,” said Johansen.

Where the Evidence Leads was published by Oxford University Press in November 2021 and is available for purchase worldwide.