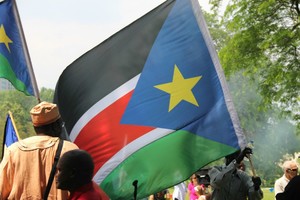 In December 2018, Laurie Nathan, Mediation Program Director at the Kroc Institute for International Peace Studies, ran a mediation training workshop for the South Sudan Council of Churches (SSCC). The event took place at an ecumenical retreat outside of the capital city, Juba, and was attended by mid-level church officials from a range of denominations, all of them actively engaged in peacemaking at the district level.

The workshop aimed to enhance the capacity of the participants, the SSCC, and its member churches to mediate conflicts at the local level. There is a critical need for such mediation throughout the country, which is suffering the effects of a devastating civil war that broke out in 2013. Although a tenuous peace agreement has been brokered by regional mediators, the divisions between the warring factions and their ethnic constituencies run deep.

The SSCC itself was divided by the war. As one participant put it, “The blood of our ethnicity proved stronger than the water of our baptism.”

Nevertheless, Nathan said, “The SSCC is the only national institution that is relatively unified, enjoys widespread legitimacy and has a presence on the ground in every part of the land. It is well-placed to get on with the urgent task of promoting healing and reconciliation within and between communities."