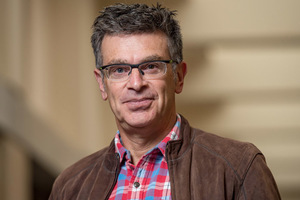 On October 9, 2020, Laurie Nathan, professor of the practice of mediation and director of the Mediation Program at the University of Notre Dame’s Kroc Institute for International Peace Studies, presented a research report to the United Nations Security Council (UNSC). The research focused on the impact of Security Council resolutions on international mediation efforts in high-intensity conflicts like those in Syria and Yemen.

The Arria-Formula Meeting was co-hosted by Germany, Belgium, Switzerland and Vietnam.

“The report and meeting were significant because this is the first time the Council has entertained a policy discussion on how its resolutions impact mediation,” said Nathan.

Commissioned by the German Federal Foreign Office, Nathan’s report aims to enhance the Council’s mediation sensitivity and effectiveness. In the concept note announcing the meeting and its importance, representatives from the host countries wrote, “There is no collective awareness of what constitutes ‘best practice’ and ‘worst practice’ UNSC mandates for mediation.” Because most armed conflicts end either with a military victory by one party or a mediated settlement, Nathan argues that the UNSC should develop resolutions that are conducive to successful mediation in order to avoid conflicts ending through military means.

In order to be most effective, Nathan suggests that UNSC resolutions should meet three criteria: they should be informed by strategic guidance on mediation in each particular conflict, including the views of the mediator if one has been appointed; they should aim to push conflict parties towards and not away from mediation; and they should afford the mediator a high level of flexibility.

In addition to Nathan, guest speakers at the meeting included prominent UN mediators and representatives of over 30 member states, including China, France, Russia, the United Kingdom and the United States.

Watch the recording of the Council meeting and read Nathan’s full report.