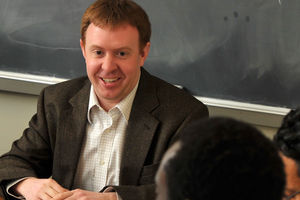 Patrick Q. Mason has joined the Kroc Institute as Research Associate Professor. He will serve as Associate Director for Research for the multi-year, multi-disciplinary research project, directed by Scott Appleby, designed to advance the comparative study of Islam and Catholicism at a time of global tension over religious extremism, religious freedom, and forms of secularism deemed hostile to both religions. He adds to the Kroc Institute’s research and teaching strength in the peace studies subfield of religion, conflict, and peacebuilding.

Before joining Kroc, Mason was Assistant Professor of History and Associate Director of the Center for American Studies at the American University in Cairo. An award-winning teacher, he taught courses on U.S. history, the American civil rights movement, religious history, and comparative global fundamentalisms. Last year, he gave a number of public lectures and media appearances on the U.S. presidential elections and the impact of the Obama administration on foreign relations, particularly in the Middle East.

Mason earned a master’s degree in peace studies at the Kroc Institute in 2003 and a Ph.D. in history from Notre Dame in 2005. He has published articles on anti-Jewish violence in the American South, the history of state legislation against interracial marriage, the role of religion in the African American protest tradition, and the possibilities for peacebuilding from within the Mormon (Latter-day Saint) religious tradition. He is completing a book manuscript titled, The Mormon Menace: Southern Anti-Mormonism and the Limits of Religious Tolerance (forthcoming from Oxford University Press in 2010).