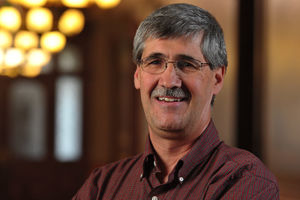 The spring 2014 semester is turning up honors for John Paul Lederach, professor of international peacebuilding at the Kroc Institute.

Widely known for his pioneering work in conflict transformation, Lederach is involved in peacebuilding work in Colombia, Nepal, Myanmar and the Philippines. He has helped design and conduct training programs in 30 countries across five continents.

At Notre Dame’s Kroc Institute, where he has taught for 13 years, Lederach also directs the Peace Accords Matrix. He is the author of 22 books, most recently When Blood and Bones Cry Out: Journeys through the Soundscape of Healing and Reconciliation (with Angela Lederach). He holds two other honorary doctoral degrees, from Elms College and Bluffton College.