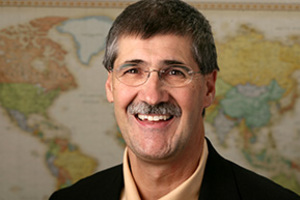 John Paul Lederach, professor of international peacebuilding at Notre Dame’s Kroc Institute for International Peace Studies, has been awarded the 2010 Pax Christi Award by St. John’s Abbey and University in Collegeville, Minn. He accepted the award at the University’s commencement ceremonies on May 9, 2010.

The Pax Christi award is given annually to individuals whose lives reflect the values of the University and the Benedictine Abbey of St. John the Baptist, including peace and justice.

“In your pioneering work on conflict transformation you have brought hope to people in areas of the world where violence and conflict have become a way of life for too many,” wrote St. John’s Abbot John Klassen, OSB and University President Rev. Robert Koopman, OSB.

“We esteem you as a man of vision and action who, as an author, educator and practitioner, also serves as a source of reference and as a role-model for others who would follow your path.”

Widely known for his pioneering work on conflict transformation, Lederach is involved in conciliation work in Colombia, the Philippines, and Nepal, plus countries in East and West Africa. He has helped design and conduct training programs in 25 countries across five continents.