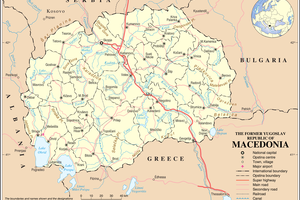 In July, Laurie Nathan, Director of the Kroc Institute’s new Mediation Program, was a lead facilitator at a workshop for political parties from Macedonia. The event was part of the Track 1.5 Dialogue in Macedonia Project, established in 2016 by the Berghof Foundation and the Southeast European Association with funding from the German foreign ministry.

The project supports Macedonia's effort to resolve its political crisis and build a national consensus on democracy and respect for the rule of law. The workshop Nathan facilitated was attended by parliamentarians, ministers, and senior politicians from Macedonia. It focused on the rule of law and the independence of the judiciary, accession to the European Union, relations with neighboring states, and improving inter-ethnic relations.

“The workshop captured the democratic imperative of robust and constructive debate, disagreement and consensus on matters of national importance,” said Nathan.