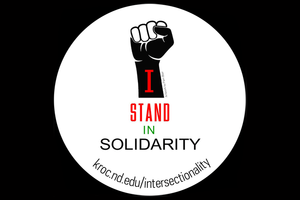 This summer, as a renewed wave of protests for racial justice spread across the United States following the murder of George Floyd, Pam Blair, academic programs assistant at the Kroc Institute for International Peace Studies, began dreaming about ways to keep the conversation about race going once media attention to the movement for black lives receded.

“The murder of George Floyd was not new to people of color, but it did turn up the temperature related to race, discrimination and police brutality in our country. People were and are outraged,” said Blair. “I instantly began to think, what gifts do I have that can contribute to unity?”

Blair, an artist and poet, drew on her creative skills to design an image of a fist of solidarity with black and white fingers. Inside the arm, the words “I stand in” appear in green and red. She hoped to create an image that would allow people to signal publicly that they were interested in creating safe spaces for further conversation about building a more just world.

“Black happens to be the color used to represent solidarity, and it fit the moment. And I wanted the fingers to represent the ideal of unity,” said Blair. “And having the word ‘I’ there was very important. I wanted it to be a personal statement of responsibility.”

Blair shared the image with leaders at the Kroc Institute, who were inspired by the design and felt that it echoed the focus of the Institute’s emerging initiative on intersectionality and justice, and wanted to find a way to share the design more broadly.

“I was delighted to endorse the image designed by Pam, as it reflects the Institute’s commitment to racial justice and our solidarity with the struggle of people of color for their natural rights,” said Asher Kaufman, John M. Regan, Jr. director of the Kroc Institute. “In addition, the design is simply cool!”

Blair collaborated with Kroc Institute communications coordinator Kristi Flaherty to turn the design into a decal sticker that was perfectly sized for adding to laptops, water bottles and other public spaces. The stickers are free for all Notre Dame students, faculty and staff members, and can be picked up in the Hesburgh Center for International Studies and at the Kroc Institute’s front desk in Jenkins Nanovic Halls.

Institute staff are also working to find ways to share the stickers with alumni located in over 100 countries around the world.

“I hope these stickers will open up conversations of dialogue, even if it’s just people starting to ask questions for the first time,” said Blair.