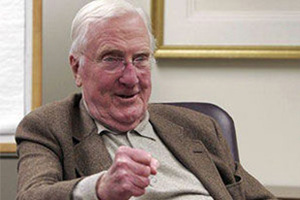 Former Ohio governor John J. Gilligan, professor emeritus of law at the University of Notre Dame and the founding director of the Kroc Institute for International Peace Studies, died Monday (Aug. 26) at his home in Cincinnati. He was 92. Read more >>

“Not least among the many small miracles performed by the Rev. Theodore M. Hesburgh, C.S.C., over the years was to persuade the former governor of Ohio, a distinguished public servant, to serve as the inaugural director of the new peace institute at Notre Dame,” said Scott Appleby, Regan Director of the Kroc Institute. “Jack Gilligan launched the Kroc Institute and provided a strong foundation by his leadership and clear vision of peace and human rights. We are grateful for the legacy and for the example he set.”

“Jack Gilligan lived a rare and much-needed combination of political skills and ethical sensitivity,” said Robert C. Johansen, Professor Emeritus of Political Science and Peace Studies, Senior Fellow and a founding faculty member of the Kroc Institute. “He knew how to lead and win elections; once he was in an elected office or administrative position, he never forgot why he chose to be there, which was to serve a purpose greater than himself. Jack ennobled his profession, whether it was the school board, the governorship, Congress, U.S.A.I.D., or the faculty of the University of Notre Dame, by steadfastly implementing policies aimed at helping those in need and advancing justice, human rights, and peace. I never saw him shy away from taking a bold stance based on ethical principle and human rights merely because it was unpopular or it might be at some cost to himself. He always seemed to be thinking about how to help those in need and how to make the future kinder than the past. We at the Kroc Institute learned a great deal from him and the University benefitted enormously from his exemplary leadership during the Institute’s pioneering days. We are deeply grateful that his bold witness graced our journey with him.”