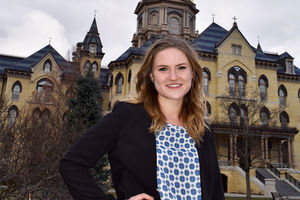 Grace Garvey’s academic curiosity isn’t confined to one subject area. Her interest in human migration manifests in all sorts of different disciplines.

She’s an anthropology major and peace studies minor who is working closely with an American studies professor on her senior thesis. For her capstone project in the Hesburgh Program in Public Service, she partnered with an economics major. And her coursework while studying abroad in Ireland focused on global perspectives on migration and archaeology.

“The world isn’t just one discipline — it’s a nexus of all these different studies,” she said. “So a liberal arts education is more realistic to the type of knowledge that you need to have moving forward when you graduate.”

As a proud Minnesotan, Garvey’s senior thesis allows her to study her passions in a place that’s meaningful to her. With funding from the Glynn Family Honors Program, she spent last summer conducting research at the Minnesota Historical Society and Midtown Global Market, an international marketplace in Minneapolis with food, shopping, and entertainment.

“The world isn’t just one discipline — it’s a nexus of all these different studies. So a liberal arts education is more realistic to the type of knowledge that you need to have moving forward when you graduate.”

“I’m using the market as a case study for how the new patterns of migration to Minnesota in the post-1990s reflect how Minnesota has been a place of a lot of different peoples meeting throughout the history of the state,” she said.

“It combines my love of Minnesota, my interest in how public policy can work with people, and how local governments, nonprofits working in the area, and community leaders can all work together to create a more integrated community.”

Her thesis research is advised by Eric Haanstad, the Department of Anthropology’s director of undergraduate studies, as well as Korey Garibaldi, an assistant professor of American studies.

Working with professors from different departments has challenged Garvey to consider the various angles through which she can view migration.

“Professor Garibaldi really pushes me on what an anthropological analysis is and how I can use what I’ve learned in anthropology,” she said, “then combine that with the elements he brings from his own area of expertise.” 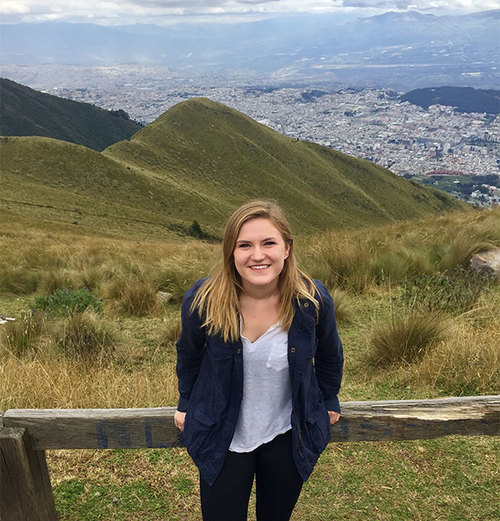 Garvey in Quito, Ecuador, as part of a trip with Timmy Global Health, a nonprofit organization that provides sustainable medical care to South American countries.

Though she was considering studying neuroscience when she arrived at Notre Dame, Garvey took James McKenna’s introductory anthropology course and fell in love with studying humanity in such an interdisciplinary way.

The summer after her freshman year, Garvey volunteered at Centro Tyrone Guzman in Minneapolis, a Latinx community center. Working with immigrants inspired Garvey to further study public policy and how it could be used to help individuals in need.

The next summer, Garvey worked with incarcerated women and children with weakened immune systems in Bolivia. She saw again how the presence of community organizations, especially the church, can play a role in helping people who are at risk.

These international experiences led Garvey to add minors in the Hesburgh Program in Public Service and peace studies to complement her anthropology major.

“Sometimes public policy fails to understand the humans that the policy actually applies to, which is why I love anthropology, because it’s actually talking with people and learning about their lived experience,” she said. “But what’s the point of public policy, what’s the point of talking to people? To try to make a more just and peaceful, harmonious society for us all to live in.” 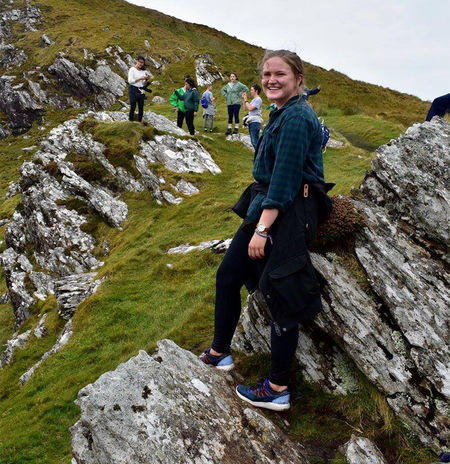 While studying abroad in Ireland, Garvey’s coursework focused on global perspectives on migration and archaeology.

For her Hesburgh capstone, Garvey worked with an economics major and fellow Minnesota native to study trade relations with countries that have large refugee populations in the United States, focusing specifically on refugee communities throughout their home state.

In addition to producing original interdisciplinary research, Garvey serves as an editor-in-chief of the College of Arts and Letters’ Journal of Undergraduate Research.

“People produce the coolest research here, but I think people get so caught up in their discipline that they’re not reading their peers’ works across disciplines,” she said. “So I love that the journal represents all of the College.”

Garvey, who hopes to pursue an advanced dual degree in law and public policy, is also the editor-in-chief of Anthrocentric, a multimedia journal for undergraduate research in the Department of Anthropology.

Working as a student assistant for Notre Dame International and Kroc Institute Policy and Peace Accords Matrix Director, David Cortright,, being involved with student government, and being in the Glynn Family Honors Program have also allowed Garvey to engage with a variety of students, professors, and ideas.

Originally published by Hailey Oppenlander at al.nd.edu on March 28, 2019.