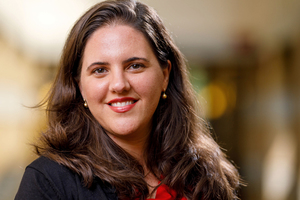 Mary Tarsha had a busy year. In addition to passing her comprehensive exams with distinction this spring, Tarsha, a doctoral student in peace studies and psychology at the Kroc Institute for International Peace Studies, co-authored two book chapters and three journal articles. She also received the Outstanding Graduate Student Teaching Award from the University’s Kaneb Center for Teaching and Learning for her work with undergraduate students during the spring semester.

In the Fall 2019 issue of the Interdisciplinary Journal of Partnership Studies, Tarsha and her advisor Darcia Narvez, professor of psychology and Kroc Institute faculty fellow, co-authored the first in a series of articles focusing on strategies for developing children’s capacity to be peaceable. The newly-published research draws on data Narvez has collected for over a decade from interactions between mothers and children.

“Peaceableness is marked by the ability to self-regulate, to practice compassion, forgiveness and empathy, among other traits,” said Tarsha. “A person’s capacity to be peaceable is largely influenced by the type of care they’ve received in childhood, especially in the early years.”

In their article, “The Evolved Nest: A Partnership System that Fosters Child and Societal Wellbeing,” Narvaez and Tarsha, draw  on scholarship from neuroscience, psychology, and ethnographic research to argue for a return to the concept of child care that takes place within interdependent partnership systems rather than more individualistic “dominator systems.”

“In these chapters, we emphasize that building the right hemisphere of the brain is important for emotional development and self regulation,” said Tarsha. “If you want more regulated kids, increase the play.”

In addition to her work with Narvaez, Tarsha co-authored an article in the January 2020 issue of Frontiers in Psychology with two colleagues from Vanderbilt University, Sohee Park and Suzi Tortora. Together they assess the impact of body-centered interventions like yoga, tai-chi, and acupuncture, in addressing psychological illnesses. These interventions are widely prescribed, but little is known about their actual effectiveness in treating particular conditions.

“Billions of dollars are spent every year on these therapies, and no one has looked at their effectiveness for particular psychopathological conditions via a review,” said Tarsha.

In addition to seeing publishing success this year, Tarsha was honored with an Outstanding Graduate Student Teaching award from Notre Dame Learning’s Kaneb Center for her work as a teaching assistant in Professor Laurie Nathan’s class, “Conflict Mediation: The Theory and Practice of Mediation.” The award “recognizes graduate student instructors and TAs who demonstrate excellence in the classroom or teaching laboratory.”

“This award means a great deal to me because I love teaching,” said Tarsha, “but also because peace education is an important part of peacebuilding and peace research.”

Tarsha was drawn to the Kroc Institute’s doctoral program because of its interdisciplinary focus, which allows students to pursue a joint degree in peace studies and one of six disciplines in the humanities and social sciences.

“Interdisciplinary research is the future,” said Tarsha. “You see the biggest contributions and advancements in science coming from research that crosses boundaries and integrates different disciplines.”

The Ph.D. Program in Peace Studies is administered by the University of Notre Dame’s Kroc Institute for International Peace Studies, part of the Keough School of Global Affairs. The program is a partnership with the Departments of Anthropology, History, Political Science, Sociology, Psychology, and Theology.