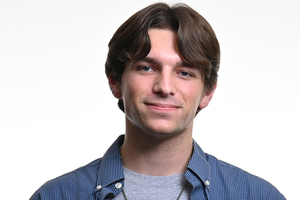 Dane Sherman is a sophomore with a supplementary major in peace studies. He grew up in Seattle, Washington, and never thought he would come to the University of Notre Dame, but is glad he did. At the Kroc Institute, Dane met a lot of like-minded people who want to make the world a better place. He cites peace studies classes as one of the things which saved his understanding of religion.

Why did you choose to pursue a peace studies supplementary major?

Before coming to Notre Dame, I did a lot of work in mental health and addiction. I never thought I would come to study here because of my personal and family background, but I feel like the people at Notre Dame really care about making the world a better place. I think the biggest concentration of that is within the peace studies program. I’ve found a lot of cool places like the Kroc Institute and the Center for Social Concerns. I’m currently studying my religion through the lens of peacebuilding, which is a unique opportunity at the Kroc Institute.

In the beginning, I thought that studying peace was the most hippie thing in the entire world, but in the best way possible. During my first year, I got really involved in student government, and I became close friends with a current peace studies graduate student, Elizabeth Boyle [B.A. ’19, MGA ’22]. She told me all about the program: all of the amazing opportunities, how peace studies had a justice-focused lens to the world, and how it was interdisciplinary. That’s how I joined.

What has been your favorite class so far?

My favorite class has been “Improvising Peace towards a Theology of Peacebuilding” with Father Emmanuel Katongole. On a non-academic level, it saved my own religion for me. I had been thinking a lot about how religion had been used to oppress a lot of people and exclude myself and others in the communities and family around me. I almost stopped being a Catholic after coming to a Catholic school!

But everything we've been reading and discussing in that class has been life-giving in terms of framing religion, and especially Catholicism and the journey of Jesus on this earth, as one of being with the margins. That class was fun because seven or eight students were ordained priests. It was also intimidating when talking about theology because you got all of these people who have studied so much. It was probably one of the greatest learning experiences for me here.

If someone asked you to describe peace studies to them, what would you say?

I usually describe it as an interdisciplinary study of different forms of violence, whether that's direct or structural or cultural, and ways to mitigate or re-imagine the structures that we live within. That can be used in a lot of different and exciting ways. I spent this summer in Arkansas doing Catholic peacebuilding with queer communities. I got to hear really beautiful and sacred stories from people who come from very different walks of life. Listening to them allowed me to rethink the ways that we are looking at these systems and ask how we can create more peaceful societies abroad and at home.

Where would you place yourself on the strategic peacebuilding wheel?

Nonviolent social change and violence prevention, conflict response, and transformation. I think it's within my call as a Christian to organize, mobilize, and work with people not just to empower them, but to help them claim their own power. I am also passionate about law, advocacy, and solidarity, and structural and institutional change because I think that a lot of the things I want to do require that.

Thank you! And what is one fun fact about you?

I have seven grandmothers (not biological, of course). I try to live my life in the ways that they have taught me.