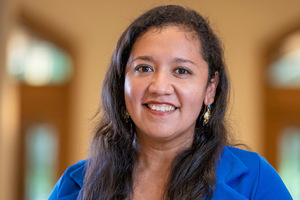 What drew you to study peace as part of the Master of Global Affairs program?

Well, I grew up in a country that experienced conflict--and a lot violence post-conflict--so what peace means and how to respond with peace is a puzzle I’m still working on. With the Master of Global Affairs focused on International Peace Studies, I’m trying to respond to the questions I have had my whole life.

What has been your favorite class so far and why?

“Structural Violence.” Coming from a country with peace accords, one of the things I mentioned in my application was that I didn’t have a lot of faith in peace accords. People usually ask me, ‘Can you talk about the war?’ or ‘Can you talk about the gangs?’ because that’s what they relate with El Salvador. I wanted to focus on structural violence, because, at the end of the day, that is what leads to these other issues.

How does your previous experience as a journalist shape your focus here at the Keough School?

I grew up thinking I wanted to be a journalist, because I wanted to speak the truth, but that is a very innocent, naive way to think. As a journalist, I wrote about corruption with a focus on public health, because the system in El Salvador offers services to 85 percent of the population.  When the government doesn’t invest in those services, that is structural violence. My articles brought me under threat from the minister at the time, so I had to leave El Salvador for a while. I ended up going to Bilbao in Spain to get a master’s degree in journalism. I realized journalists there were facing a very different kind of violence, but still facing violence. When I started working for the Pulte Institute, I got more interested in the diversity of challenges to global development and thought the Master’s program would be a good opportunity for me to get more training.

You mentioned how you had this interest in telling the truth when you were younger that motivated you to become a journalist.  Do you still have that drive?

Yes. It’s probably not just the idea of ‘say the truth’ that I had when I was twelve or something, but more the idea to serve other people. Through my different professional experiences, I went from being a journalist to working with a program on human rights to now learning in the classroom. But whatever I’m doing, I hope it’s helpful for others, not just myself.

As you have studied with the Keough School, are there any experiences you find yourself coming back to and reflecting on?

Coming from a country with its own history of conflict, it is interesting to compare what theory says to what my own life has shown me. Actually, the first day of classes last semester, a professor asked what peace means to us and some of my classmates started offering really good answers based on theory.  And I was like, ‘I don’t know what you guys are talking about. I don’t get how to connect that with experiences from my own life.’ But that didn’t stop me from sharing my thoughts, and I was definitely offering a completely different perspective. Like when we talk about colonization, sometimes I am in a weird position because I’m from the other side.  I’m like, ‘Yeaaah, that’s not how we see it.’”

Do you think there is a benefit to coming with your perspective and bringing this degree of skepticism?

Definitely. My professors and classmates have been very open to my comments when I express my opinion. I think it has been enriching for them to hear from someone who comes from a country that suffered a conflict, and enriching for me to be able to articulate my frustrations with the peace accords in El Salvador. For example, in peace studies, we talk a lot about trying to include the locals. But I have asked many times, ‘Who are the locals?’ In the case of El Salvador, if you ask people, they will say: ‘We have the guerillas. We have the government.  Those are local actors.’ This is true, but most Salvadoreans weren’t part of those two groups.

The peace in El Salvador wasn’t a project that the rest of the population felt they had a part in.  And it’s interesting that when you do an evaluation of peace accords, you just do an evaluation of the contract. That’s why, if you read about my country, you will see that the peace accords are considered successful, even with the violence and corruption we have had since then.

How has your idea of peace changed over the years?

When I was in Spain, I was studying journalism, not peace studies. For them, at that time, there would be peace if the ETA--the Basque terrorist group--would stop its attacks. From my own experience, I realized how hard it can be for someone who grew up with violence even to be in a safe place. Bilbao was a very safe place (in comparison to El Salvador, despite ETA threats) and it took me almost a year to be comfortable walking alone at night. All my friends would say, ‘Clara, it’s safe. Nothing is going to happen.’ But where I grew up, even if you’re in a very nice neighborhood, no one--especially not a woman--would walk alone at night. I think when I was in Europe I learned more about myself and my traumas. Here I have learned more about theory and practice.

Your focus at this point is on immigration. Has that been an interest throughout your entire career or something that grew over time?

For the first semester of IPS, we do a genogram. You have to look at your family and see the different aspects that have an impact on your life. Obviously, the war was one of the things that impacted my life, and one of the effects was emigration. I realized that I only have eleven direct relatives in El Salvador and I have 53 here in the United States. I have always had this interest in immigration, because of my family, but through that exercise I realized why.

Also, when I went to Washington, D.C., as part of my work with Pulte, we presented to USAID and Congress. They would always call us ‘real people.’ Like: ‘Oh, I want to be around you because you’re real people. Because you come from Central America, you are real people.’  For me, it was so interesting. I’m ‘real people’ because I speak English and I came here legally, but theCentral Americans who are walking here in a caravan aren’t. That’s why I decided to focus more on immigration.

Actually, coming here to start the program gave me a chance to reflect on immigration. I had to get special permission from the U.S. embassy to fly, because the airport was closed in El Salvador. It was a humanitarian flight with United, but the plane was arriving in El Salvador with deported people. So the airport was closed, but El Salvador was still receiving those deported from the U.S. I had to explain to two Interpol agents why I was even allowed to go to the U.S. As I was coming here on the plane, I was sitting in the seat that someone who was deported had been sitting in. Even without being an American, I had the privilege to come from El Salvador. I just kept thinking about that. Because of different experiences like these, I decided to focus on immigration.