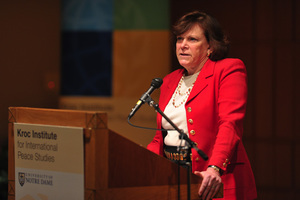 Mathews' lecture, "Can America Still Answer to History? What's Gone Missing and How to Get It Back," is free and open to the public. Mathews will address the growing weakness of the United States in the international community, discuss the costs of its diminished role, and offer recommendations for strengthening the U.S. government's position abroad.

Before her 1997 appointment to the Carnegie Endowment, a global think tank with offices in Washington, D.C., Moscow, Beijing, Brussels, and Beirut, Mathews served in the executive and legislative branches of government, management and research in the nonprofit arena, and journalism and science policy.

"There is no one more qualified than Jessica Mathews to assess the rapidly shifting international landscape, and to analyze the opportunities as well as the perils confronting the United States in the context of the new globalization," said Scott Appleby, the John M. Regan, Jr. Director of the Kroc Institute.

"Peacebuilders, of course, are hoping that the Obama administration will seize the moment to upgrade the diplomatic corps, strengthen alliances with emerging democracies, and engage civil society in devising nonviolent campaigns for constructive social change. Drawing on wide-ranging policy expertise and experience, Dr. Mathews will help us identify the possibilities for renewal of America's global leadership in these and related areas."

Mathews was director of the Council on Foreign Relations’ Washington program and a senior fellow from 1994 to 1997. While there she published her seminal 1997 Foreign Affairs article, “Power Shift,” which chronicles a shift of power away from the state and into the hands of international organizations, businesses, and nongovernmental organizations. The article was chosen by the editors as one of the most influential in the journal’s 75 years.

From 1982 to 1993, she was founding vice president and director of research of the World Resources Institute, a center for policy research on environmental and natural resource management issues. She served on the Editorial Board of the Washington Post from 1980 to 1982, covering arms control, energy, environment, science, and technology. Later, Mathews wrote a weekly column for the Washington Post  and in the International Herald Tribune.

From 1977 to 1979, Mathews was director of the Office of Global Issues at the National Security Council, covering nuclear proliferation, conventional arms sales, and human rights. In 1993, she returned to government as deputy to the undersecretary of state for global affairs. Earlier, she served on the staff of the Committee on Energy and the Environment of the Interior Committee in the U.S. House of Representatives.

Mathews has published widely in newspapers and in scientific and foreign policy journals, and she has co-authored and co-edited three books. She holds a Ph.D. in molecular biology from the California Institute of Technology.