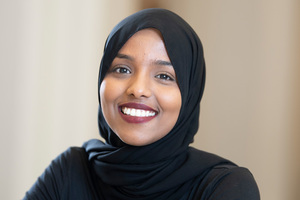 Matthew: You were a clinical psychologist prior to coming to Notre Dame. How did you end up at the Kroc Institute?

Bishara: I went into clinical psychology because I saw how mental health issues were affecting my community. I’m Kenyan, but my ethnicity is Somali. So I grew up around Somali refugees— because Kenya took the biggest number of refugees from the civil war in Somalia— and I got to see how all my peers went through the UNHCR [the UN Refugee Agency] or IOM [International Organization for Migration] to be sponsored to go to Europe or America. By the time I was in high school, most of my childhood friends were resettled. The ones who could not be resettled didn’t have the right documents, because even though the Kenyan government allowed them to seek asylum, it never recognized them as residents or citizens. But they still wanted to make a life for themselves, so they started taking the illegal route to Europe.

Looking at all these issues of identity, I decided to pursue a degree in psychology. Then, once I started working professionally with an NGO supporting the Somali parliament, I got to see how the trauma from the civil war of the past three decades had manifested. They were really detached from their emotions and that really affected how they led the country. That’s when I pursued a Master’s in clinical psychology.

After that, I worked with another NGO that specialized in trauma healing through community dialogue and awareness of what trauma looks like. Part of my job was to assess the participants of the organization’s training program. I would assess them for PTSD prior to joining the program and once they went through the training. I saw in the post-assessment that nothing really changed. They still had the same symptoms. I realized I was talking to these people about breathing exercises, about reaching out to people, but the root causes of their mental health issues were still systemic. I have to advocate for policies that can address the root causes, instead of the symptoms. That’s why I applied for the Keough School’s Master of Global Affairs in International Peace Studies: to see how peacebuilding policies and other issues, such as mental health, can all link.

Do you have a favorite professor or class that you’ve taken so far?

Yes, I have so many. From my first year, it’s definitely Professor Clemens Sedmak. He really reinforced how in any aspect of professionalism, as peacebuilders or in sustainable development, we should always look at the integral human development. How are we approaching this person as a human being rather than as a project?

Then, Professor George Lopez. I appreciated his practical experience. He told us to have a moral compass and to do the right thing in any position we have. We cannot be led by our title or our salary; we always have to think bigger.

This semester, I like my forced migration class by Professor Erin Corcoran, because it addresses all the issues I’ve seen with refugees, and my environmental policy class with Professor Ellis Adams. I’m learning so much, because it’s an area I haven’t really been familiar with.

As a psychologist, you were able to get a different perspective on trauma than most other people. How has your view on trauma evolved over time?

How I saw trauma was really influenced by the Strategic Peacebuilding class with Professor David Anderson Hooker, who specializes in trauma. He told us that we can’t address trauma in a top-down process. Before we talk about trauma on the national or international level, we have to address it on the local level, where people can sit together in their own community and gain insight. Give them that space where they can process it, that way they can address the root causes, either structural or cultural. Then they can be involved in other agencies at the middle and national level. Peacebuilding and trauma healing should always start at the community level. Always. Don’t approach it from the top-down.

A lot of what seems to be motivating you came from when you were growing up. Are there any memories or experiences you hold onto that drive you to keep going?

My grandmother is Somali-Somali, so she doesn’t have the documents. If my mom was born in Somalia and we never had the documents, I would have been born in Somalia as well. I would have gone through what my childhood friends or my neighbors were going through. So I always think: I had the luck of being born in Kenya and having a birth certificate.

Once the British left, the borders were divided out. The part of Kenya that I was born in originally belonged to Somalia, so I was lucky enough to live by the border. It’s just by destiny or by God’s fate that I was born in Kenya, and I had those documents. I always look at it from that perspective. It could have been me. If it had, I would wish that somebody was doing something, helping me in any way they could.

In addition to your psychological work, you have been a consultant with the Green String Network and the Somali government, through the National Democratic Institute. So you have seen many different approaches— governmental, economic, personal— to peacebuilding. What part does policy play in responding to mental illness among migrants and refugees?

I would say that policy influences a lot. It enforces actions that can protect refugees in many different ways. For example, in Kenya, the people that I grew up with were either children when they came to Kenya or were born in the camps. If the 1951 UN Refugee Convention was enforced, I think it would have really stopped all these root causes of the trauma. If they had protections in terms of institutions or services, like a right to go into the hospital or to go to school, these things would protect them from underlying issues that can stem into mental health issues.

Most of the people I grew up with had anxiety or depression from being arrested by the police, from wondering what their life would be like if they had the documents to survive day-to-day, from a loss of identity—because are you Somali or are you Somali-Kenyan because you were born in Kenya? If Kenya, as a signatory to the UN Convention—accepting so much money from the UNHCR—recognized that these people who came into their country were asylum-seekers and utilized the money to allow them to go to school, to look for a job, to get the right documents… all of this, I think, might have been avoided.

As you have started to study peace more, are there any people that you have talked to whose experience you were able to learn a lot from?

Yeah, I think I’ll just speak to one of my mentors who was my program manager from the National Democratic Institute. Once, we left a workshop and had a Member of Parliament from Somalia in the car. The MP had a phone call and we asked who called. He said, “My brother just got killed in a bomb explosion in Somalia.” And we were like, “Oh wow. Do you want us to change your flight? Do you want to go to the finance meeting? Do you want to go now?”

My boss and I were gaping, wondering “Is this normal?” He’s a Member of Parliament. He’s in the legislative branch. He’s running a country, representing a whole constituency. We were just shocked. That’s when my manager, who’s now my friend, told me: “Bishara, you have to pursue your master’s in clinical psychology and you have to address this trauma. We cannot keep training people who have evident signs of PTSD and expect the country to go in a better direction, because these people can barely handle their own personal lives—let alone run a whole country.”

So he really encouraged me. He always gave me books. He wrote my reference letter to Kroc. I think he really shaped the direction of my career, of my passion.

That’s a really amazing story, because I have a friend from Canada who is Yemeni-Somali. Not long after we met, she lost two cousins in a single week from two separate bombings in Somalia. She was just destroyed by the news. It’s really incredible to think that somebody could have that sort of experience and be able to just shake it off.

Yeah. I really realized that the value of life in Somalia is nothing. It’s a daily occurrence there. You leave your house and think, “I may not come back.” And it’s sad that they have made peace with this. It’s so sad. With the amount of funding from foreign aid that goes into that country, there must be, at least, some change. It’s so sad that nothing is changing.

Well, that’s not a very high note to end things on.

Yeah, it’s not a good note to end to, but it’s… it’s life. And you have to change it somehow, in some way.

And you’re trying to.