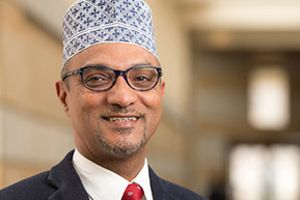 The inauguration of Barack Obama as president of the United States is a momentous event that signals an opportunity for change, says Rashied Omar, a research scholar at Notre Dame’s Kroc Institute for International Peace Studies.  But we must not be fooled into thinking change will come automatically.

“Expectations are high that the election of the first black president of the United States represents hope for transforming our world for the better,” he says.  “Archbishop Emeritus Desmond Tutu has even compared Obama’s victory to that of the election of Nelson Mandela as the first black president in South Africa in 1994. The question now is: Will Americans realize — as South Africans have had to agonizingly learn to understand and appreciate — that the election of Mandela or Obama was not the change, but rather an opportunity for change?

“The U.S. is facing monumental problems and Obama is operating within the limits of his office and of powerful domestic and foreign interest groups. True change will only come if independent civil organizations and strong social movements in the U.S. and abroad hold him and all those in power accountable for their moral and political mandate.

“Obama has inspired a huge and powerful movement in the U.S. and indeed across the world. Will this global social movement now retire, or will it maintain its momentum and continue to pressure the president and other world leaders to fulfill aspirations for a more just and humane world?  In his refrain of “Yes We Can!,” Obama has made it clear that he recognizes he cannot bring change on his own. But WE can, together, with his leadership.”