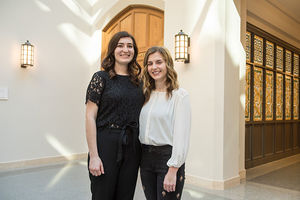 The Notre Dame Student Peace Conference, sponsored by the Kroc Institute for International Peace Studies, is an annual event organized by students and for students. Its mission is to provide space for undergraduate and graduate students to engage in dialogue on important issues related to peacebuilding, social justice and global issues. It’s a space where students can share their research with other students and network with peers who share their personal passion and academic interest in peace.

This year’s conference will focus on the theme “Toward Justpeace: Exploring the Intersections of Justice and Peace.” It will run April 13-14 at the Hesburgh Center for International Studies on the campus of the University of Notre Dame. Registration is now open.

How did you first decide to pursue a major in peace studies?

Elizabeth: I came to Notre Dame wanting to study pre-med and Spanish. As time went on, I realized that my interests did not lie in the hard sciences. I found my way into a class with Steve Reifenberg [Associate Professor of the Practice of International Development; Co-Director, Integration Lab at the Keough School of Global Affairs] and realized there were a lot of different ways to use my skills and talents to make a difference in the world and it didn’t have to be through medicine. Peace studies offered a broad and comprehensive worldview that would allow me to be a part of positive change.

Erin: I was a political science major coming in. One of the Resident Assistants in my dorm was a peace studies major and also poli sci. She was talking about how she liked that peace studies was a more optimistic version of political science and she took time to talk with me about current events. I figured out by the end of freshman year that I wanted to pick up peace studies. I was originally a minor, but the more classes I took, the more peace studies I wanted.

Where did the idea for this year’s conference theme come from?

Elizabeth: So many of the questions facing the world today are questions about justice. We recognized that sometimes justice and peacebuilding can go together and sometimes they can be opposed. We wanted to 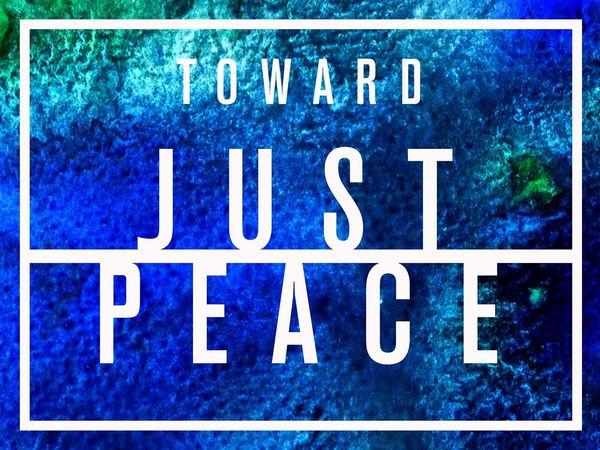 make space for people to talk about many of these pressing issues in our world and to consider what it means to pursue just peace.

Erin: We wanted to make sure that this was a conference that appealed not only to peace studies students, but that was interdisciplinary.

Elizabeth: We also both saw the film Whose Streets? at DPAC [the DeBartolo Performing Arts Center] this fall. [The film follows events and activism in Ferguson, Missouri, in 2014, shortly after 18-year-old Michael Brown was shot and killed by police officers.] We left the film very moved by what we had seen.

Erin: We were both pretty sure that the themes the movie raised were themes we wanted to dive into at the conference. Professor David Hooker [Associate Professor of the Practice of Conflict Transformation and Peacebuilding] was our senior seminar advisor, and we talked with him about these ideas. He had a contact who knew Brittney Ferrell and Alexis Templeton, activists from Ferguson who were featured in the film. We are so excited to be able to bring them in as our keynote speakers. We will also be screening Whose Streets? during the conference, too.

You all just finished sorting through all of the proposals you received for presentations at the conference. What types of sessions can conference attendees expect?

Erin: We were really excited by how broad proposals are. We have so many different topics that we are able to delve into with this theme. The presentations will address questions of environmental justice, representation in the media, and the role of gender in peacebuilding. There are many varying themes, but with a connecting underlying point looking at the intersections of peace and justice.

Elizabeth: This year we will have quite a few roundtables hosted by teams who are coming to present. There will also be more variety and interaction in the presentations this year. People who come won’t just be sitting and listening, but will be actively engaged in a conversation.

As you are preparing for the conference, what are your hopes for what people will take away from this event?

Erin: When I tell people that I’m a peace studies major, they often kind of smirk. I hope people get out of this an awareness that the work of peace studies is really tangible and has a lot of valuable effects that get overlooked because peace is often seen as unattainable. And I hope that attendees get a feel through our keynote speaker that everyone can do something, and that peace and justice are not just theories, but something you can put into practice.

Elizabeth: I also hope that people will leave feeling both optimistic and challenged as we think about the future and the world around us. I hope we’ll feel ready to find solutions and work together to address conflict and violence in a variety of different ways and be challenged to think about the ways we operate in the world.

What drew you to both to the co-chair roles? Why was planning this conference something that you wanted to take on?

Erin: I was in Washington, D.C., last spring and would attend conferences at the United States Institute for Peace or conferences hosted by the Alliance for Peacebuilding, the organization I was working for. They were always incredible gatherings and really fascinating, but they were never designed with students in mind. I think it’s important that there’s a chance for students to have this kind of dialogue and to figure out how new ideas resonate with their own academic passions.

Elizabeth: We have learned so much from the peace studies faculty here at Notre Dame. We both see this as an opportunity to leave our mark on Kroc and to give something back to a place that has made such an impact on us.

Notre Dame is unique in having both this peace studies program and this student-led conference. Allowing undergrads to come from different schools and programs and step into this space together equips us to have better conversations and learn from each other.

What would you say to someone who was on the fence about attending this conference? Why should they register?

Erin: It’s a chance to meet people that you might not otherwise encounter and to talk about things that I generally think are relegated to conversations you don’t have in public. These are conversations that are important but that people don’t know how to begin. This conference will give you opportunities to create action plans and give you tools to start to address issues that you’re passionate about.

For more information and to register, visit the Student Peace Conference website.