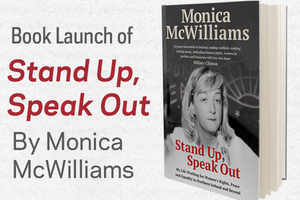 Join the Kroc Institute for International Peace Studies and the Clingen Family Center for the Study of Modern Ireland for a book launch of Monica McWilliams' latest book, Stand Up, Speak Out: Women’s Rights, Peace and Equality in Northern Ireland and Beyond.

Monica McWilliams was elected to the multi-party peace negotiations, representing the Northern Ireland Women’s Coalition and is a signatory to the 1998 Good Friday Agreement. She was elected to the first Northern Ireland Legislative Assembly and was Chief Commissioner of the Human Rights Commission where she drafted the advice on a Bill of Rights for Northern Ireland. She currently serves on the Independent Reporting Commission overseeing measures for the ending of paramilitarism and continues to work on conflict resolution issues, including in Syria and Eastern Europe. She is Emeritus Professor at Ulster University and her recent book, ‘Stand Up, Speak Out: Women’s Rights, Peace and Equality in Northern Ireland and Beyond’ was published by Blackstaff Press.

This event will be followed with an opportunity to purchase the book and have copies signed by the author in the Jenkins Nanovic Hall Forum.