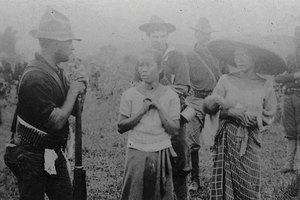 Between 1893 and 1902, the U.S. forcefully annexed Hawai’i and the Philippines and participated in the brutal suppression of the anti-imperialist Boxer Uprising in China. Since that time, the Asia-Pacific region has been a major site for the development and maintenance of U.S. empire, a history rooted in racism, which has engendered numerous, broad-reaching revolutionary struggles, and which continues to have profound consequences for people in Asia, the Pacific, and the U.S. today. The panelists will show that, despite the oft-repeated goal of promoting democracy, U.S. empire has consistently produced state repression and violence—for people living in Asia and the Pacific, and for AAPI communities in the U.S.

Historian Moon-Ho Jung (University of Washington) will address U.S. empire building in Asia and the Pacific from the Philippine-American War to World War II. He will especially highlight anti-colonial solidarity movements in Asian, Pacific Islander, and Asian American communities and the repressive responses from the U.S. state, arguing that these attempts to repress pan-Asian revolutionary movements helped produce the U.S. national security state as we know it, along with current U.S. anti-Asian racism. Asian American studies and cultural studies scholar Nerissa S. Balce (SUNY Stony Brook) will consider questions of cultural production and the afterlives of U.S. empire in the Philippines, with a focus on the Philippine police state and its most recent manifestations, including the Duterte drug war and the harassment of Filipino activists. Taipei-based writer, editor, and activist Brian Hioe will address the paradoxes of U.S. empire for Taiwan in the context of escalating Sino-U.S. tensions, and the enduring challenges for Taiwanese people caught between the hegemonic forces of the U.S. and the People’s Republic of China.

The panel will be moderated by Sigrid Schmalzer, a founding member of the Critical China Scholars and a professor of modern Chinese history in the UMass Amherst History Department. This event is co-sponsored by Critical China Scholars, the Five College Asian/Pacific/American Studies Program, and the Feinberg Series co-presenters noted below.

Register to attend the event >>

Nerissa S. Balce is associate professor of Asian American studies at SUNY Stony Brook. Her research focuses on race, gender, state violence, and popular culture in the U.S. and the Philippines. She is the author of the book, Body Parts of Empire: Visual Abjection, Filipino Images and the American Archive (University of Michigan Press 2016 and Ateneo de Manila University Press 2017), winner of the 2018 Best Book Award in Cultural Studies from the Filipino Section of the Association for Asian American Studies. The book was also a finalist for the best book in the social sciences for the 2018 Philippine National Book Awards. Her latest book project explores ways of seeing the Philippine state in colonial and contemporary photography and in Filipino American fiction. She was born and raised in Manila, Philippines, and lives in Long Island, New York.

Brian Hioe is one of the founding editors of New Bloom, an online magazine covering activism and youth politics in Taiwan and the Asia Pacific that was founded in Taiwan in 2014 in the wake of the Sunflower Movement. He is a freelance journalist, as well as a translator. He has a master’s in East Asian Languages and Cultures from Columbia University and graduated from New York University with majors in History, East Asian Studies, and English Literature in 2013. From 2017 to 2018 he was Democracy and Human Rights Service Fellow at the Taiwan Foundation for Democracy. Hioe’s writing has been published in The Washington Post, Dissent, The Nation, The Diplomat, Art Forum, and other publications, and media appearances by him include on BBC, Al-Jazeera, CNN, and Democracy Now!. His writing focuses on contemporary politics, society, and the arts in Taiwan.

Moon-Ho Jung is professor of history at the University of Washington, where he teaches courses on race, politics, and Asian American history. He is the author of Menace to Empire: Anticolonial Solidarities and the Transpacific Origins of the U.S. Security State (University of California Press, 2022) and Coolies and Cane: Race, Labor, and Sugar in the Age of Emancipation (Johns Hopkins University Press, 2006).

Sigrid Schmalzer (moderator) is professor of history at UMass Amherst, where she teaches modern Chinese history and the history of science. Her academic works include Red Revolution, Green Revolution: Scientific Farming in Socialist China (University of Chicago Press, 2016), which won the Levenson Prize from the Association for Asian Studies. She is a founding member of the Critical China Scholars, which offers a critical perspective on the deepening U.S.-PRC conflict, recognizing that the roots and causes of injustice lie in political and economic systems—including capitalism, authoritarianism, imperialism, racism, and patriarchy—that transcend national boundaries.

The 2022-2023 Feinberg Series is exploring histories of U.S. imperialism and anti-imperialist resistance. It is presented by the UMass Amherst Department of History in collaboration with the Ellsberg Initiative for Peace and Democracy and in partnership with more than two dozen co-sponsors. The Feinberg Family Distinguished Lecture Series is made possible thanks to the generosity of UMass Amherst history department alumnus Kenneth R. Feinberg ’67 and associates.