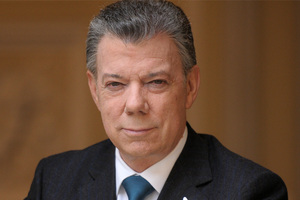 This event is free but ticketed. Tickets will be available for pick-up at the DeBartolo Performing Arts Center Ticket Office one hour prior to the performance.

To ensure the safety of all patrons and employees, there will be a bag policy in effect for this event. Prohibited items include, but are not limited to, purses larger than clutch bag, briefcases, backpacks, computer bags, camera bags, diaper bags, plastic grocery store bag and other large bags. Bags of any kind will be subject to inspection. Complimentary coat check will be available to store these items.

Lecture title: "Changing the Means But Not the Ends"

President Santos will reflect on the situations a leader must face when unexpected obstacles appear along their path, and he will share anecdotes of when things did not go according to the plan. Learning from history, from the experience of others, and from his own experience, he will share how he had to change course on many occasions, but always kept in mind the end goal.

Juan Manuel Santos was the President of Colombia from 2010 to 2018. During his time in office, the historic Colombian Peace Agreement was signed on November 24, 2016, and is celebrated as a major turning point in ending the country’s 52-year armed conflict. The Agreement gives the University of Notre Dame’s Kroc Institute primary responsibility for technical verification and monitoring of implementation of the accord through the Peace Accords Matrix (PAM) Barometer Initiative.

Santos was the sole recipient of the Nobel Peace Prize in 2016 for ending the longest armed conflict with the oldest guerrilla in the Western Hemisphere. He also received the Lamp of Peace from the Sacred Convent of Assisi in Italy, which honors those working to promote peace and harmony, and the Tipperary International Peace Award in Ireland for his efforts to bring peace to his country and the region.

For his aggressive environmental policies to protect his country’s biodiversity and fight climate change, he was awarded the Royal Botanic Gardens Kew International Medal and the Wildlife Conservation Society Theodore Roosevelt Award for Conservation Leadership. In addition, the National Geographic Society honored him for his unwavering commitment to conservation.

Before serving as President, Santos served as Minister of Foreign Trade and was elected to the Colombian Congress as the Presidential Designate (similar to the role of Vice President in the U.S.). He also served as Minister of Finance and Minister of Defense. Prior to serving in government roles, Santos was a deputy publisher and journalist with the Colombian publication El Tiempo. He won the King of Spain Prize for Journalism for a series of articles looking at corruption within the Sandinista Revolution in Nicaragua.

Santos is a graduate of the Naval Academy in Cartagena. He holds a Business and Economics degree from the University of Kansas and also conducted post-graduate studies at the London School of Economics, the Fletcher School of Law and Diplomacy at Tufts University, and as a Fulbright Fellow at Harvard University.

During Fall 2022, Santos is a Distinguished Policy Fellow at the Keough School of Global Affairs.