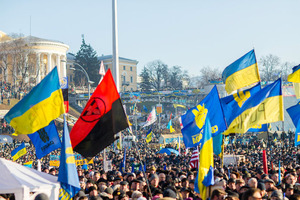 In Ukraine, civilians replace road signs to confuse Russian military vehicles, they block roads with cement blocks and iron pins, and they have set up a complex humanitarian aid system with neighboring countries. Within Russia, protests and resignations by universities, media outlets, and professionals denounce the military invasion. Join us to learn more about the strategy of civil resistance in Ukraine and the region.

Panelists include leading experts in civil resistance, some joining us from the frontlines in Kyiv.

Panelists (listed in the order in which they will speak):

Maria Stephan is Chief Organizer of the Horizons Project where she convenes strategic partnerships for collective action to build a just, inclusive, and peaceful democracy in the US. Before joining the Horizons team, Stephan founded and directed the Program on Nonviolent Action at the U.S. Institute of Peace. She is the co-author of Why Civil Resistance Works: The Strategic Logic of Nonviolent Conflict, which was awarded the 2012 Woodrow Wilson Foundation Prize by the American Political Science Association.

Andre Kamenshikov is the regional representative of Nonviolence International (USA) and the Global Partnership for the Prevention of Armed Conflict (GPPAC) in the post-Soviet states. He has been an activist developing local capacities for peace in conflict areas of the ex-USSR since 1992 in areas of potential and acute violent conflict, primarily in the North Caucasus region of the Russian Federation, where he works closely with a group of local NGOs and civil activists as well as representatives of different key professional groups such as educators, journalists, police, official authorities from different levels of government, and international organizations including UN agencies.

Kai Brand Jacobsen is the President of the Romanian Peace Institute (PATRIR) which supports global peace support operations, professional development, and pioneering research to improve the evidence-base to inform policy and practice. PATRIR is leading an effort to help coordinate an international peace response with its partners across Romania and internationally to offer efficient support for Ukrainians in humanitarian aid, civil resistance, and peace efforts.

Felip Daza is Research coordinator at Observatory on Human Rights and Business in Barcelona, Spain, professor at Sciences Po University and National University of "Kyiv-Mohyla Academy" and member of International Institute for Nonviolent Action which is supporting local civil resistance in Ukraine and Belarus to confront the Putin government’s brutal military aggression with organized mass noncooperation to deny Russia local consent and material resources.

Katerina Korpalo, a university student from the National University Kyiv-Mohila Academy, will join Daza from Kyiv to discuss the research project on civil resistance. She is a member of International Relations Club and European Youth Parliament Ukraine.

Rev. Karen Dickman is the Executive Director of the Institute for Multi-Track Diplomacy (IMTD). The Institute for Multi-Track Diplomacy has been building cooperative trade associations for economic development in Ukraine based on transparency and accountability. When the war started this month, IMTD shifted to running humanitarian aid for the Ukrainian government. IMTD is now in conversation with the government of Ukraine to facilitate services to their refugees and IDPs, and to rebuild the country's economy after the war.

David Cortright is professor emeritus of the practice at the Kroc Institute, part of the Keough School of Global Affairs at the University of Notre Dame. Cortright is the author or co-editor of 19 books, including Civil Society, Peace and Power and Uniting Against Terror: Cooperative Nonmilitary Responses to the Global Terrorist Threat (MIT, 2007). Cortright has a long history of public advocacy for disarmament and the prevention of war. As an active-duty soldier during the Vietnam War, he spoke against that conflict. Now, he is coordinating a group of U.S. veterans to urge defections within the Russian military.