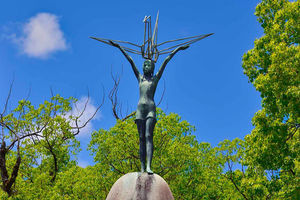 RSVP for this event is required >>>

In November 2017, Pope Francis denounced nuclear deterrence as morally unacceptable for the first time, which represented a major shift in the Vatican’s nuclear doctrine. He made this historic pronouncement during the Dicastery for Promoting Integral Human Development's international symposium on “Prospects for a World Free of Nuclear Weapons and for Integral Disarmament," which was the first global gathering on atomic disarmament after the approval of the Treaty on the Prohibition of Nuclear Weapons in 2017.

This event continues the discussion begun at the symposium and draws on the book A World Free from Nuclear Weapons, published by Georgetown University Press in August 2020 coinciding with the seventy-fifth anniversary of Hiroshima and Nagasaki. The COVID-19 pandemic has inspired many efforts to rebuild the world in a more just fashion, but the issue of nuclear disarmament has not yet been pursued meaningfully. This event hopes to inspire diplomatic action, promote intercultural dialogue, and foster greater understanding of integral human development as envisioned by Pope Francis in Laudato Si and Fratelli Tutti. A panel of experts will discuss the place of the Treaty on the Prohibition of Nuclear Weapons (which enters into force in January 2021) on the path to nuclear abolition and integral disarmament.

This event is sponsored by the Vatican's Dicastery for Promoting Integral Human Development in partnership with the Berkley Center for Religion, Peace, and World Affairs, Georgetown University; Georgetown University Press; Kroc Institute for International Peace Studies, Keough School of Global Affairs, University of Notre Dame; and the Catholic Peacebuilding Network.

This event will be livestreamed to the Vatican News channel on YouTube. Please RSVP to receive email reminders.