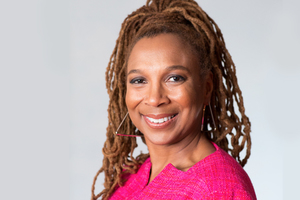 Professor of Law at UCLA and Columbia Law School

Kimberlé Williams Crenshaw is Professor of Law at Columbia Law School and the University of California, Los Angeles, and has written in the areas of civil rights, black feminist legal theory, and race, racism, and the law. She is a leading scholar of critical race theory and developed the theory of intersectionality to describe how overlapping or intersecting social identities relate to systems of oppression.

Crenshaw is director of the Columbia Law School's Center for Intersectionality and Social Policy Studies (CISPS), which she founded in 2011. She is also co-founder of the African American Policy Forum.

Crenshaw's work has appeared in the Harvard Law Review, the National Black Law Journal, the Stanford Law Review, and the Southern California Law Review. She is a founding coordinator of the Critical Race Theory workshop and co-editor of Critical Race Theory: Key Documents That Shaped the Movement. Crenshaw has lectured nationally and internationally on race matters, addressing audiences throughout Europe, Africa, and South America. She has facilitated workshops for civil rights activists in Brazil and in India, and for constitutional court judges in South Africa.

Her work on race and gender was influential in the drafting of the equality clause in the South African Constitution. In 2001, she authored the background paper on Race and Gender Discrimination for the United Nations’ World Conference on Racism and helped facilitate the inclusion of gender in the WCAR Conference Declaration. In the domestic arena, she has served as a member of the National Science Foundation's committee to research violence against women, and has assisted the legal team representing Anita Hill.

In 1996, she co-founded the African American Policy Forum to highlight the centrality of gender in racial justice discourse. Crenshaw is also a founding member of the Women's Media Initiative and writes for Ms. Magazine, The Nation, and other media, and is a regular commentator on NPR's “The Tavis Smiley Show” and MSNBC. With the support of the Rockefeller Foundation, Crenshaw facilitates the Bellagio Project, an international network of scholars working in the field of social inclusion from five continents.