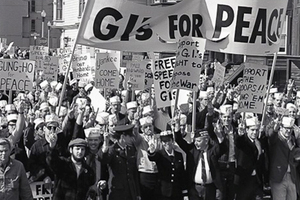 Registration for this conference is now completed. Contact Lisa Gingerich with questions about the event.

The Kroc Institute is sponsoring the conference “Voices of Conscience” at the University of Notre Dame. The three-day conference, running May 22-24, will examine the history and moral and political implications of opposition to war within the military during the Vietnam and Iraq wars.

The program will also include film presentations featuring Connie Field and her new film The Whistleblower of My Lai; Academy Award winner Barbara Kopple and the films Winter Soldier and Shelter; and David Zeiger and his film, Sir! No Sir!.

“Voices of Conscience” will launch the GI Press Project, the newly created digital archive of antiwar newspapers published by active duty GIs during the Vietnam War. The conference will also feature the exhibit Waging Peace, highlighting information on soldier and veteran opposition to the Vietnam War.

Panels at the conference will address the following topics:

Registration for this conference is now completed. Contact Lisa Gingerich with questions about the event.

This research (event, creative work, etc.) is made possible in part by support from the Institute for Scholarship in the Liberal Arts, College of Arts and Letters, University of Notre Dame.

Voices of Conscience: Historical Perspectives on the Vietnam Antiwar Movement, May 2018

Voices of Conscience Conference: Conscience and Resistance from Vietnam to the Present, May 2018