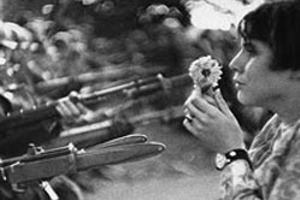 The Browning Cinema will be screening two rare films (MARCH ON THE PENTAGON and VIET FLAKES) related to the 1967 March on the Pentagon and following them with a panel discussion and Q&A.

Director of Policy Studies and the Peace Accords Matrix

On October 21, 1967, David Ringo filmed a march on the Pentagon on 16mm, which became an incredibly important document of resistance to war. Now 50 years later, a print has been digitally restored for Notre Dame. With approximately 50,000 participants involved in the actual march to the Pentagon, the protest included Norman Mailer, Allen Ginsberg, and the co-founders of the Yippies (Abbie Hoffman and Jerry Rubin). Its broad impact on the course of the Vietnam War, the nature of political protests, and various political systems can both still be seen and remains relevant today. Prior to the David Ringo newsreel, Carolee Schneeman's short will be screened.

This is a free but ticketed event. Reserve Tickets Here.

Co-sponsored by the Kroc Institute for International Peace Studies and the Notre Dame Department of English.