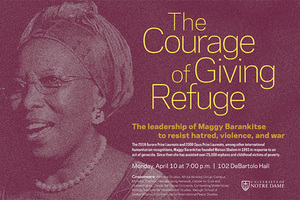 Marguerite (Maggy) Barankitse has been variously hailed as “the Mother Teresa of Africa”, a “humanitarian hero”; and “the most impressive Catholic woman leader out of Africa.” At her lecture on April 10th, she will share about her passion for providing refuge, the role her faith plays in her work, and her reflections on ethical leadership. A light reception will follow the lecture.

In 1993, having survived massacre in her native Burundi, Maggy founded Maison Shalom (House of Peace), determined to raise up a new generation of children in a spirit of love beyond the ethnic hatred she had witnessed. Over the years, Maison Shalom has grown from a small relief organization into a large enterprise, giving refugee to over 20,000 children in Burundi, DRC Congo and Rwanda. These have included war victims, HIV/AIDS orphans, street children, and child soldiers. She has set up homes for them, schools, job training centers, a theatre, and a swimming pool. Maison Shalom’s work has also extended into the community where she has set up microfinance schemes, cooperatives for farmers, a community hospital, and a radio station.

Maggy is driven by her Catholic faith and the firm conviction that since love is our true identity (“we are made in love and for love”) hatred and evil will never have the last word. This conviction has been recently tested when the government in Burundi targeted her because of her outspoken advocacy for human rights and closed down Maison Shalom’s operations. In exile in neighboring Rwanda where she now lives, Maggy has continued to work with children in refugee camps, ensuring their education, and setting up a micro credit project for young refugee mothers and a cultural community center.

For her courageous and visionary leadership, Maggy has received numerous awards, including the Aurora Prize for Awakening Humanity (2016), the Opus Prize (2008), the Prize for Conflict Prevention (2011), UNESCO (2008), the Nansen Refugee Award (2006), the Four Freedoms Award from the Franklin and Eleanor Roosevelt Institute (2004), Voices of Courage Award of the Women’s Commission for Women and Refugee Children (2004), The World Children’s prize (2003), the Juan Maria Bandres Prize for Asylum Rights (1998), and the French Government’s Human Rights Prize (1998). She has also been awarded a number of honorary doctorates by universities, including one from the Catholic University of Louvain (Belgium) and from Duke University.

The Keough School of Global Affairs is serving as Maggy’s primary host, with co-sponsorship from Africana Studies, Campus Ministry, Catholic Peacebuilding Network, Center for Civil and Human Rights, Center for Social Concerns, Kellogg Institute for International Studies (and its Africa Working Group), and the Kroc Institute for International Peace Studies (and within that the Contending Modernities research initiative).