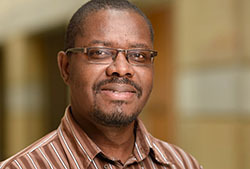 Coordinator of the Religion and Migration Research Initiative at the African Centre for Migration and Society, University of the Witwatersrand, Johannesburg; Kroc Institute Visiting Research Fellow

The paper discusses the dynamics of formation and mobilization of the new Congolese Combattant militant migrant groups that have globally embargoed Congolese politicians, musicians and religious ministers supporting the current Congolese regime from visiting or holding public events outside their country of origin. Enhanced by moral proximity and the resulting constitution of mediatized networks of political concern created by new media technologies, the Combattants’ violence is an expression of migrants’ pragmatic insurgent citizenship activism. Kankonde introduces the theoretical model of transnational insurgent citizenship activism to conceptualize the transnational reality whereby migrants, operating either as nationalist or pro-democracy and rule of law groups, engage in political violence in host settings to simultaneously contest the basic legitimacy of their homeland authorities and to instrumentally capitalize on the very same violent acts in attempts to legitimize their stay or access other material or moral benefits in the host countries.